For several years, we ran the largest commercial goat dairy in the state of Colorado.  We started small, but grew very quickly.  In the late ‘90’s we were milking a few cows and started looking at adding goats.  We found a goat dairy in Niwot that was interested in buying our milk, so we began buying some goats.  We remodeled our barn so that we could milk 12 goats and three cows at a time, into different tanks of course.  I believe we started shipping goat milk in early 2002.  By 2003, we sold the cows and remodeled the barn again, putting in a double 20 goat parlor.  By 2005, we had well over 450 goats, with 280 in the milking string.

From the beginning, the cheese plant kept asking if we could increase our winter milk production to even out the supply.  They offered price incentives in the form of higher pricing for milk produced October through March.  We had only moderate success.  We tried breeding earlier, we tried breeding later, we tried milking some for extended lactations, we tried everything we could think of, but nothing was highly successful.  The major dairy goat breeds are very photoperiod sensitive.  Shorter days bring on estrus, triggering the breeding response.  Therefore most goats will breed between the summer solstice and the winter solstice.  Hot summer days are not conducive to good pregnancy rates, so the breeding season is further shortened.  Some have had some success with manipulation of lighting, but I was not set up well enough to bet my income on that.  However, there is another way.
Goats developed in Equatorial Africa are not photoperiod sensitive.  They will breed any month of the year.  When crossed with other goats, they seem to pass on that trait.  African Pygmy and Nigerian Dwarf are the Equatorial African goats readily available in the U.S.   The Kinder breed was developed in America by crossing registered Anglo-Nubian does with registered African Pygmy bucks.  The offspring were then bred to each other, maintaining the 50% Nubian, 50% Pygmy parentage.  Strict culling and no outcrossing “fixes” the desired traits.  The result is a dairy goat that is approximately ¾ the size of the average dairy goat, but retains a lot of the “meat” characteristics of the Pygmy side of the equation.  At first glance, it would seem to be a huge disadvantage to have ¾ size goats in a commercial dairy.  I like to experiment as much as the next guy, but who wants to milk 25% more goats to get the same amount of milk?  How can it be cost effective to add 25% to your milking time every day?  The bonus for winter milk was only about7%.  That alone would not make up the shortfall.
Conventional wisdom told me that it was a bad idea to put ¾ size goats into a commercial goat dairy.  However, the masses are usually wrong.  If all the dairymen do things the same way, it’s probably wrong.  If you copy what everyone else is doing, you will get the same results they get.  All of the dairies I knew were sold on Saanens and Alpines with a few Nubians thrown in for butterfat.  We had goats of every dairy breed and every cross thereof. 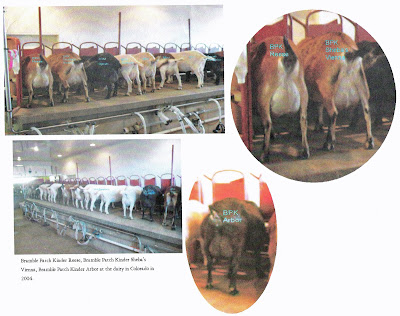 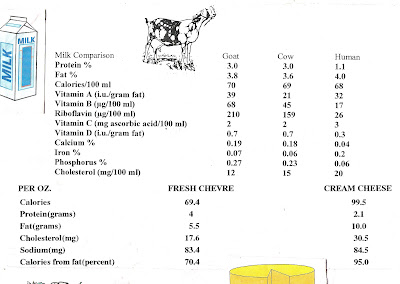