The Kinder is a dual purpose goat used for both milk and meat.  The meat aspect has been neglected by many breeders.  Our beloved Kinders have become more dairy in type sacrificing meat production for milk production.  While for many milk is all they want, a breeder needs to keep in mind the fact that usually about half the kids are bucks.  Not all bucks should be kept as bucks.  On average only 1 out of 10 is truly buck quality.  What do you do with the rest of those darling little fellows.  True, you can wether them and sell them as pets or brush clearers but that market saturates fast.
In our area there are a couple of meat goat buyers.  They pay by the pound and their price depends on the type of goat.  Dairy kids bring less per pound that meat kids.  I have worked on my marketing with the meat goat buyer I use and he knows that my kids pack meat.  I am now getting the same price per pound for my Kinder boys as he pays for the Boer kids.
If you are planning on slaughtering any kids this year please keep records and let me know what the live weight, carcass weight and actual meat weight wrapped is.
The chart below will show some of the yields that come from well bred Kinder kids.
For more information on Kinders as meat goats look in the blog archives in 2012 October Kinders as Meat goats.
Jean Jajan

Selling, Butchering and Processing Your Goats

There has been much more written regarding the milking ability of the Kinder goat than that of its ability to produce a good meat carcass. The Kinder goat is a very good meat animal as well as a milking animal. This makes it a dual purpose goat just as it is advertised to be.

Kinder goats will breed every month of the year sometimes being referred to as, “aseasonal breeders”. The Kinder is also known for their multiple births so these two factors can provide lots of meat for the freezer or added income from the sale of the animals to the meat markets or both. Always remember that those Kinder does will at the same time be providing milk and milk products for the table.

Unfortunately there have been no official studies done on Kinder goats as a meat animal. There are only the statements of breeders as to quantity and quality of the Kinder meat carcass. Breeders report that on average a Kinder kid will weigh between four to five pounds in a triplet or greater birth. It is reported that their average weight of gain each month is from seven to nine pounds in the first eight months of life. This of course depends greatly on the type of care received.

A few years ago at Lincoln University’s, Carver Farm, in Jefferson City, MO at a Goat Day put on by the Missouri Goat Producers there was an evaluation and judging of different breed carcass and the Kinder goat was part of this program. The two Kinder goat carcasses pictured are the first place winners. These carcasses are from a triplet birth. The animals were five months old; one weighed 16 pounds and the other 18 pounds dressed out as shown. The other picture is the other goat of the triplet set shown on foot at five months of age.

As you can see the Kinder goat is truly a meat animal as well as a dairy animal. Best of both worlds! 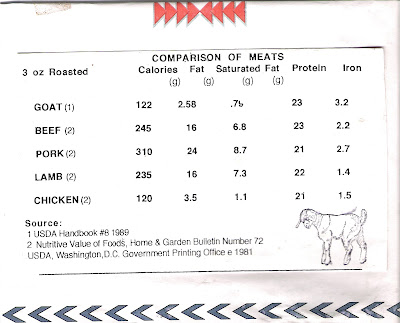